The Two Faces of the Corporation Commission

It's not that I wanted to stay silent on the whole Corporation Commission mess...

...it's just that for the past six months, every time I sat down to write something, a new controversy would surface. My best attempt to clarify this long-running scandal that is our current Commission is to simply state that these five statewide elected officials are embroiled in a battle of gutter politics of their own making. The Commissioners' own actions started this downward spiral and no amount of spin will change the fact that it is their actions that are at issue, not the messenger.

Commissioner Bob Stump has been pontificating to anybody who will listen that "dark money" from the solar side is the issue. Really? I guess he would like us to believe that there is "good" dark money and "bad" dark money. 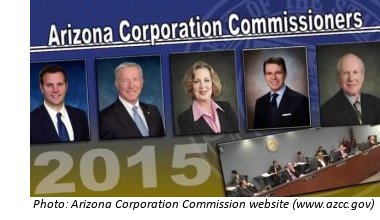 Dark money is either good or it is bad--you can't have it both ways. If Commissioner Stump is so annoyed by the impact these dollars are having on the good-name of the Commission and the integrity of the Commissioners, then he should join the call for a complete accounting of the dark money expenditures by the entities that he has jurisdiction over: the utilities and their parent companies. Until he does so, this show of righteous anger is just bad political theater.

Commissioners Tom Forsee and Greg Little, beneficiaries of the dark money that helped defeat their opponents, continue to take offense at anybody who questions their independence.  Yet the news media across the state keeping pointing out that these commissioners' actions are only giving credence to the allegations coming their way.

Then there is the case of Chairwoman Susan Bitter-Smith who has announced she will resign on January 4, 2016, the day before the Supreme Court is scheduled to hear a suit to remove her from office.  Her resignation makes the hearing moot. Still, Bitter-Smith says she wants her day in court. Again, you can't have it both ways: if you want your day in court then you don't resign the day before the hearing.

Commissioner Bob Burns is caught up in the same type of controversy that led to Bitter-Smith's resignation. To his credit, Burns has remained largely silent on his case, letting the process play out.

If you are keeping score at home, then it is pretty clear that there is a lot of smoke in the air--and that can only mean one thing: fire.

Question: Has the Arizona Corporation Commission lost the trust of Arizonans?  If so, what can be done to restore that trust?