The Times They Are a Changing (Redux)

This marks my 40th year working in the renewable energy space that is solar energy.

In 1976, I was one of those long-haired agitators carrying signs and going places we were told not to go. I went anyway. Somehow or another I avoided arrest--probably because in the mid-70s everybody was a little weary of drawing battle lines and fighting over who was right and who was wrong. We marched in the middle of the street, climbed over fences, made speeches, sang protest songs, and demanded a clean energy future. And unfortunately, too few people cared.

Then one morning, May 3, 1978 -- the first official "Sun Day" -- people all over the globe woke up and greeted the sun and joined President Carter in declaring it the dawning of the solar age. And it was.

Nobody quite knew what the solar age would look like. Although it was just a dream at the time, the gift of potential energy from the Sun was very real and in time more and more people came to realize that it was much too important to ignore.

As with many paradigm shifts, to give life to this dream, people had to take great risks and buck authority. And they did. 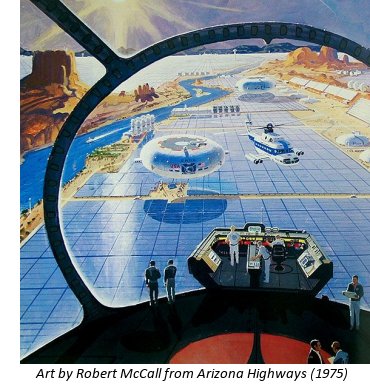 The 1970s dawning solar age envisioned a future with our homes, water and food being heated by the warm power of the sun. The power to light, cool and run our appliances would still be a function of a centralized power plant, but that power was to come from the sun, falling water, and the restless power of the wind.

In the 1990s, the vision of a solar age morphed into one where the rooftops of America could supply all the power we needed to turn darkness into light for our homes and businesses. And it almost happened.

At the beginning of this decade, the 1990s vision of a solar future was within reach. But as has been the history of solar energy throughout the last century, nothing comes easily. The rules were changed to tilt the playing field away from an alternative future.

Today there are new risk-takers--young entrepreneurs who once again are reinventing the solar future. And they're winning.

Rapid cost reductions are making battery storage attractive for energy-generating households. The cost of lithium ion storage technology is falling at a rapid rate and is poised to become a cost-effective partner with photovoltaics in solving the intermittency and peak power arguments that throttled solar's rapid growth beginning in 2013.

So the 2016 vision of the solar age is not science fiction. This coming year is shaping up to be a breakthrough year for solar energy and energy storage. Last week the U.S. Department of Energy awarded $18 million to six innovative clean energy projects. These projects will enable the development and demonstration of integrated, scalable, and cost-effective solar technologies that incorporate energy storage to power American homes after the sun sets or when clouds are overhead. And that's a game changer.

Question: What will the solar age look like in another 40 years, that is, around 2056?

Tags:
energy storage solar future vision Sun Day
What Goes Around – Comes Around
Building a Dream, Then and Now