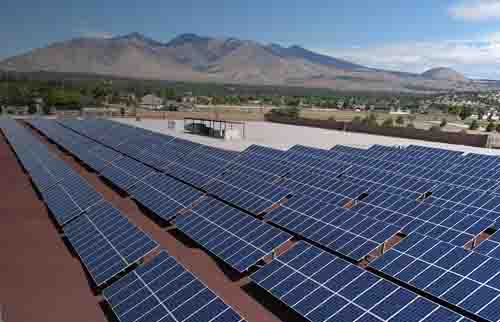 APS recently issued two separate Requests for Proposals for solar and wind resources that will help expand their renewable energy portfolio to approximately 2,500 megawatts by 2021. The first RFP is seeking competitive proposals for up to 150 megawatts of APS-owned solar resources to be in service by Dec. 31, 2021. Projects must employ commercially proven technology and must be designed with the flexibility to add energy storage as a future option.
The second RFP is for up to 250 megawatts of wind resources to be in service as soon as possible, but no later than 2022.
According to the APS posting on www.arizonagoessolar.ord in November 2019 APS has 26 MWac APS owned and 840 MWac utility scale systems connected under power purchase agreements (PPA)owned by others.

As part of its commitment to reduce carbon emissions and invest in 1,000 megawatts of new utility-scale solar energy by 2025, Salt River Project has invested in two new solar energy + battery storage plants.

The Sonoran Energy Center will be the largest solar-charged battery project in the state and the addition of these two plants will make SRP one of the largest investors in energy storage in the nation.

Combined, these plants will generate enough solar energy to power approximately 100,000 homes and will store excess energy in state-of-the-art battery storage systems that will be available to customers during the peak energy usage period when demand is at its highest.

The solar plants will also contribute to the SRP goal of adding 1,000 megawatts of new utility-scale, solar energy to its system by the end of fiscal year 2025 as well as SRP’s 2035 goal to reduce the amount of carbon emissions per megawatt-hour by more than 60 percent and by 90 percent in 2050.