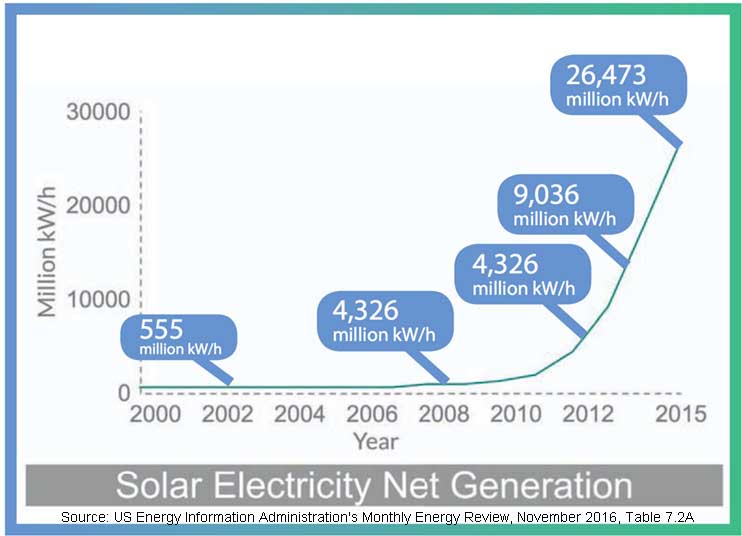 This is part one of a three-part series discussing “solar wars.” There will be three battles in this war: net-metering, tariff reform, and grid defection. This will have short and long term impacts on the solar industry, and it is expected to drive innovation.

The net-metering battle has begun, as utilities across the US are lowering the price they are willing to pay for customer-generated electricity from solar. I am predicting a series of solar wars in the near future. They will be mainly between the existing monopoly electric utilities and the solar industry that is involved with behind-the-meter solar installations. Utilities are not against solar, as this new technology gives them another method to meet electricity demand, but what utilities dislike is their customers producing their own electricity by any means such as solar, wind, or other on-site generators. It means customers purchase much less energy from the utilities.

Up until about 2005, the United States was the leader in solar electric installations, but other countries such as Germany have become larger players. As we can see on the graph, solar was not growing much in the US until about 2011-2012.

This surge in solar installations starting in 2011 has created this first solar battle about net-metering. Before 2012 utilities in the USA had no reason to see solar as a threat to them, as the amount of revenue lost to customer self-generation was extremely small. So during this timeframe, utilities did not mind giving customers full retail credit for their excess energy.

Net-metering typically occurs between 10 am and 4 pm when a customer’s solar system is producing more electricity than the onsite loads require: the sun is shining and the occupants are off at work. This “extra” energy is sent back through the utilityowned meter and into the grid; typically, it amounts to about 20-30% of the electricity produced by the solar system.

Net-metering means full retail credit for one’s excess energy; your bill would have it energy usage reduced, and if your usage goes negative, then you get a rollover credit for you next month’s bill. The battle is about the utilities wanting to change this credit on customers’ bills so that it’s lower than the retail rate of electricity. This has started discussions about the concept of “the value of solar” for utilities in many states.

Many utilities were startled after 2012 by the large increase in rooftop solar installations. In many locations this lost revenue was still not significant, but the growth and trends were disturbing.

Utilities are regulated on a stateby-state basis by their respective public utilities commissions, or PUCs.

The first three states to enter into the net-metering battle were California, Arizona and Nevada, due to excellent solar insolation and relatively high electric rates. Earlier this year, in California, the PUC rejected any changes to net-metering, while in Nevada the PUC allowed the utility NV Energy to reduce its credit to customers by 75% reduce how much they credit consumers bills by 75%.

The Nevada decision is still being altered and reviewed, but Solar City, one of the nation’s largest residential installers, has left Nevada due to this PUC decision.

What happens next in the net-metering battle?

We had an electricity war over 100 years ago – the current wars. This battle was between Thomas Edison and George Westinghouse: Edison wanted a direct current grid, while Westinghouse fought for alternating current. This war was fierce and very public, as the solar wars are becoming today. Nikola Tesla’s patent for the inductive motor was the innovation needed to help decide the “war of the currents.” Inductive motors work with AC, not DC, so when Westinghouse licensed Tesla technology he was able to defeat Edison, and now we have the AC electric grid. Free markets today are helping to decide our solar war about net-metering. This free market competition in the solar industry has brought down the cost of solar-generated electricity to under 3 cents per kwh.

We are seeing innovation in the energy storage space. Remember the typical residential solar system only nets back to the grid about 20-30% of its production. Most of the electricity produced by a solar system is consumed directly in the home. The reason this is important is that to effectively eliminate net-metering back to the grid, you don’t need a lot of storage. Could it be a strange twist of fate that the company called Tesla can use technology, just as the firm’s namesake Nikola Tesla did, to decide this battle in energy?

The short-term impacts of the net-metering battle will adversely affect residential solar installations in the United States. This will happen on a state-by-state basis, depending on the political leanings of each state’s PUC. Here are some of states that are either in, or may soon enter, the net-metering battle: Arizona, Nevada, Maine, Florida, and Alabama.

The biggest short-term loser may be Sun Power due to its exposure to the United States residential market, and its weak cost structure as mentioned in my last article on solar.

The longer term impacts on the solar industry are much more interesting. This net-metering battle is driving innovation in the energy storage and inverter space. Tesla has already announced that it will develop the solar roof and its own inverter/storage technologies. Tesla is buying Solar City, so the combination of the two firms can continue to innovate to eliminate the need for net-metering.

In my opinion within a few years, all residential solar installations will have storage, smart inverter, and curtailment control. In this case with no electricity being passed to the utilities equipment and grid, customers will not even need to notify their utility of their new solar system – or ask for “approval.”

With these longer term impacts in mind, I see this as a positive for several companies: Enphase Energy , Solaredge Technologies, Tesla, and Aquion Energy. All these firms are spending money on research and development on smart energy storage, and have shown to be quite innovative. I do see a technological battle between lithium ion battery and aqueous flow type technology in the near future.

About the Author:
Bill Ellard is an energy economist and consultant, serving businesses, utilities, and municipalities and focusing on distributed generation implementation, solar energy, demand response, demand side management, microgrid development, facility energy management, and renewable energy integration. He can be reached at This email address is being protected from spambots. You need JavaScript enabled to view it..