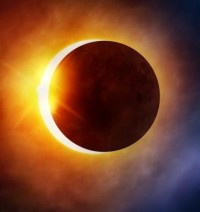 Put this on your calendar!

The morning of Monday, August 21, 2017, a total eclipse of the sun will occur and is expected to have a dramatic impact on the electric grid in the U.S. The path of totality will extend from South Carolina on the East Coast to Oregon on the West Coast. California's San Juaquin and Coachella valleys, both key solar producing regions, will see coverage of around 76% and 62%, respectively. And, although it will be spared the full impact, California is planning for the potential of major disruptions in its grid as the production of electricity from photovoltaic installations falls from a normal level of over 8,700MW to 5,600MW while demand is rising by 1,300MW primarily due to the increased use of electric lights.

Worse-case estimates by the California Independent System Operator (CAISO) predict as much as a 4,200MW reduction in solar generation. Regardless of the actual decrease, the rate of change will be significantly higher than the system was designed to handle and will be a particularly difficult-to-manage problem. The typical ramp rate for the grid at sunrise and sunset is about 29MW per minute. The ramp rate during the eclipse is forecast to be 70MW per minute during the drop off and nearly 100MW per minute during the ending phase of the eclipse.

The rapid return of PV electricity at the end of the eclipse (3X the rate the grid is designed to handle under typical conditions) is expected to be particularly difficult for the grid to absorb without going into an overload condition. As a result, CAISO is working to coordinate a “ramp up plan” that will place limits on how quickly PV power can be ramped up from the peak of the eclipse at about 10:22 a.m. until the end of the eclipse at 11:56 a.m., possibly extending into early afternoon.

Behind-the-meter solar generation will be particularly hard to control and hence its impact will be difficult to estimate. Currently CAISO is obtaining behind the meter solar generation forecasts as well as large scale solar generation forecasts from two forecast service providers. The providers will be producing a forecast accounting for the solar eclipse that will automatically feed through the ISOs daily processes. The aggregate forecast for large scale solar will be available to the market participants, as well as public, through the OASIS applications.

Knowing that the critical information needed to have the most accurate forecast possible will be feeding into the market optimization as well as other processes will assist greatly in optimizing the market with the solar eclipse. In addition to the above some of the additional actions and processes to be followed will include:

Future events like the August eclipse have the potential to be even more disastrous. Today, California uses about half of U.S. solar capacity and about 10 percent of the state’s electricity is from PV; enough to power Los Angeles. A new estimate from the U.S. government shows that California met its goal to produce about half the state's electricity from renewable sources for three hours on March 11. The estimate comes from the U.S. Department of Energy's statistics division.