Warning: count(): Parameter must be an array or an object that implements Countable in /usr/home/suntracker/public_html/j39c.azsolarcenter.org/components/com_easyblog/views/categories/view.html.php on line 166

Warning: A non-numeric value encountered in /usr/home/suntracker/public_html/j39c.azsolarcenter.org/libraries/src/Pagination/Pagination.php on line 140

While blog entries are initiated by the Solar Center, we welcome dialogue around the posted topics. Your expertise and perspective are highly valued -- so if you haven't logged in and contributed, please do so!

Living with the Sun - Arizona Style 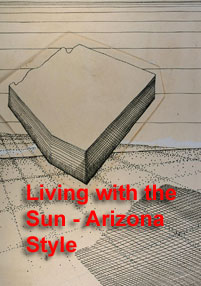 Arizona is a land of physical and climatic diversity -

from the San Francisco Peaks to the Sonoran desert, Arizonans past and present have adapted to this land of diversity and often to conditions of climatic intensity. The heat of the desert summer sun and the cold of a mountain winter have had direct impact on the form and shape of our buildings, and the patterns of our behavior.

Ninety-three million miles away, the sun blazes energy toward Earth. When this energy reaches Earth, the energy transmitted in short wave-lengths (visible light, ultraviolet, etc.) penetrates our atmosphere and strikes the Earth's surface. Energy in long wavelengths (such as infrared, thermal radiation or heat) is absorbed by carbon dioxide and other gases in the atmosphere. When penetrating short wavelengths strike Earth, they are converted into long wavelengths (in the form of heat radiation) and reflected back toward space. Some thermal radiation escapes, but most of it remains trapped inside our atmosphere. These long waves build up and keep Earth warm. This phenomenon, known as the greenhouse effect, enables life to flourish on Earth. Its future effects are also the subject of much discussion.

According to Socrates, the ideal home should be cool in summer and warm in winter. But Socrates' ideal was not easy to accomplish 2,500 years ago in ancient Greece. The Greeks had no artificial means of cooling their homes during the scorching summers; nor were their heating systems, mostly portable charcoal-burning braziers, adequate to keep them warm in winter.

Modern excavations of many Classical Greek cities show that solar architecture flourished throughout the area. Individual homes were oriented toward the southern horizon, and entire cities were planned to allow their citizens equal access to the winter sun. A solar-oriented home allowed its inhabitants to depend less on charcoal - conserving fuel and saving money.

When the planet was first formed, it was a fiery ball of liquid and gas. As it cooled, an outer crust formed over the hot mass. This crust is the surface of the earth where man dwells. Geothermal energy is nearly as old as the Earth itself. It comes from heat being trapped in hot melted rock, called magma or lava, below the Earth's surface. When this heat energy is tapped, it is a tremendous source of power.

Geothermal energy is a renewable resource; about 95 percent of the hot water in geothermal reservoirs began as cool rainwater. When rainwater seeps through cracks in the Earth's crust, it is heated by magma and turns to steam. The steam rises to the atmosphere, cools, turns back to liquid, falls back to earth as rain and eventually seeps back through cracks to be turned back into steam.

Arizona has an abundance of low-temperature geothermal areas, or hot springs, in the southeastern part of the state. Although the majority of these areas are not suitable for generating electricity, they do have potential for heating and cooling greenhouses, nurseries and fish farms.

The two highest temperature springs in the state are Clifton and Gillard, both in the Clifton-Morenci area of southeastern Arizona. The water temperature at these springs ranges from 158-180 degrees Fahrenheit. Even though temperatures may exceed 284 degrees Fahrenheit at depth, these two sites are only suitable for low grad steam. Neither of these areas has been developed.

Biomass can be a significant energy resource when used as fuel. Biomass is plant materials or animal waste used as a source of fuel. In a sense, biomass is really another form of solar energy. Plants store energy derived from the sun and convert it into chemical energy through photosynthesis. Waste plant and animal materials still contain energy, which can be captured through "bioconversions."

The most important issue facing the goal of extensive biomass production in Arizona is the availability of land and water for such purposes. While land availability does not appear to be a problem in this state, water availability is.