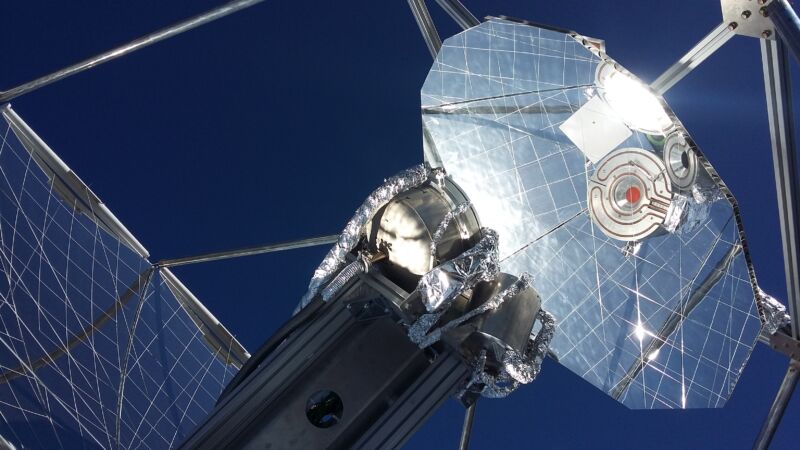 At some point in the future mankind will have to cleans the atmosphere of harmful elements (carbon dioxide, etc.) and produce any required hydrocarbons from scratch.  The article below shows one element of this. Sustainability has to be a key element in the future.

An anonymous reader quotes a report from Ars Technica:

Carbon capture. Hydrogen production. Synthetic fuels. All of these technologies have been proposed as potential resources for dealing with the crises created by our carbon dioxide emissions. While they have worked in small pilot demonstrations, most of them haven't demonstrated that they can scale to provide the economical solutions we need. In the meantime, a group of European researchers sees the methods as part of a single coherent production platform, one that goes from sunlight and air to kerosene. Thanks to a small installation on the roof of a lab in Zurich, the team has been producing small amounts of different fuels using some mirrors and a handful of reaction chambers. While the full production process would also need to demonstrate that it can scale, the researchers calculate that the platform could fuel the entire commercial aircraft industry using a small fraction of the land in the Sahara.
[...]
Overall, the results are clear: The process can work, but it's not productive enough to matter in its current state, so a large portion of the paper considers optimization and scale. Optimization is mostly a matter of many little improvements, like the better use of waste heat to ensure all the necessary heat is provided by the solar reflectors. Other targets include better catalysts and more efficient means of storing the gasses between steps. Then there's a matter of scale. To fuel a daily round-trip flight between New York City and London, the researchers estimate, it would take 10 mirror farms directing sunlight at reaction chambers in an area that gets strong and consistent sunlight. That translates to covering around 3.8 square kilometers of the desert with mirrors. (For context, that's about a quarter of the size of California's Ivanpah solar facility.) Providing for all of commercial aviation's fuel needs would require taking over half of one percent of the surface of the Sahara Desert. And that means a lot of mirrors.

The researchers suggest we will likely see the sort of dramatic cost reductions seen in other renewable resources, including technologies like concentrating solar power. That mirror-based tech saw prices drop by 60 percent over a recent 15-year period. But it's questionable whether the sorts of price drops we've seen with photovoltaics are possible, given the large material costs of all those mirrors and their associated hardware, plus the maintenance costs of keeping them clean. The flipside is that concentrating solar power costs have continued to come down, and a lot of those savings could probably be applied to heat-driven chemistry like this. And it's possible that this basic concept -- solar-powered green chemistry -- could be adapted to produce fuels with a higher value than kerosene.