Lawrence Berkeley National Laboratory has published an interesting paper based on a survey of solar industry professionals and other sources to clarify trends in the expected useful life and operational expenditure (OpEx) of utility-scale photovoltaic (PV) plants in the United States.

Solar project developers, sponsors, long-term owners, and consultants have increased project-life assumptions over time, from an average of ~21.5 years in 2007 to ~32.5 years in 2019. Current assumptions range from 25 years to more than 35 years depending on the organization; 17 out of 19 organizations surveyed or reviewed use 30 years or more.

Levelized, lifetime OpEx estimates have declined from an average of ~$35/kWDC-yr for projects built in 2007 to an average of ~$17/kWDC-yr in 2019. Across 13 sources, the range in average lifetime OpEx for projects built in 2019 is broad, from $13 to $25/kWDC-yr. Operations and maintenance (O&M) costs—one component of OpEx—have declined precipitously in recent years, to $5-8/kWDC-yr in many cases. Property taxes and land lease costs are highly variable across sites, but on average are—together—of similar magnitude. Other OpEx line items include security, insurance, and asset management.

The paper is available at: https://eta-publications.lbl.gov/sites/default/files/solar_life_and_opex_report.pdf

When the Arizona utility regulators met to decide these issues they deadlocked over whether they should increase the state's requirements for renewable energy. It proved not possible to obtain the agreement of at least three commissioners, the meeting was adjourned.

With this rulemaking, the Commission adds a new Article 26, entitled " Interconnection. of Distributed Generation Facilities" to 14 A.A.C. 2, the Chapter containing the Commission's rules for fixed utilities, with the new Article 26 including 28 new rules. The rules for Interconnection of Distributed Generation Facilities ("DGI Rules") establish mandatory technical standards, processes, and timelines for utilities to use for· interconnection and parallel operation of different types of distributed generation ("DG") facilities; customer and utility rights and responsibilities; provisions for disconnection of DG facilities from the distribution system; specific safety requirements; more flexible standards for electric cooperatives; a reporting requirement; and a requirement for each utility to create, submit for initial approval and submit for approval periodically and when revised, and implement and comply with a Commission-approved Interconnection Manual.

The first dozen pages are basically legal stuff.  The document defines how an utility must review, then accept/reject/etc. an application to connect distributed generation to the utility.  It defines both customer rights and utility procedures.  There are a lot of utility, installer and customer comments along with the ACC staff recomendations. 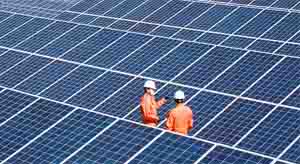 174 Power Global, Corp., a California-based subsidiary of South Korean company Hanwha, plans to construct, operate, maintain, and decommission a utility-scale photovoltaic solar facility (800 megawatts) on 4,654 acres of BLM-administered public land in southeastern La Paz County.  While the proposed site is likely within view of I-10 about midway between the Phoenix metro area and the California border, it is not near any sizable community.  The BLM held a public meeting in Quartzsite, West of the map image above, on February 19th.

The site, just south of Interstate 10, is close to a recently approved but still-to-be-constructed substation and a new 'Ten West Link' transmission line. The proposed project is still in the early stages. It must be approved by the BLM, then go through an environmental review under the National Environmental Policy Act process, before it can be fully approved and construction can begin.  The location is ideal for selling the energy into both the Arizona and California markets.

Hanwha Q Cells recently opened the largest solar factory in the Western Hemisphere. The 300,000 square foot factory in Dalton, Georgia has the capacity to produce 12,000 PV modules per day, or 1.7 GW annually – the same peak generating capacity as the Hoover Dam. This project will use about half the annual production of the new plant.

The pilot will be available to APS residential customers who install residential battery systems, enroll in a TOU (Time of Use) or TOU-plus-demand service plan and commit to discharging their batteries during on-peak periods. (Note: Rate requirements are waived for customers on grandfathered solar rates.) The pilot will help APS learn about battery performance in a variety of conditions and how batteries may create value for customers through improved management of energy demand at their residence and help reduce stress on the electric grid.