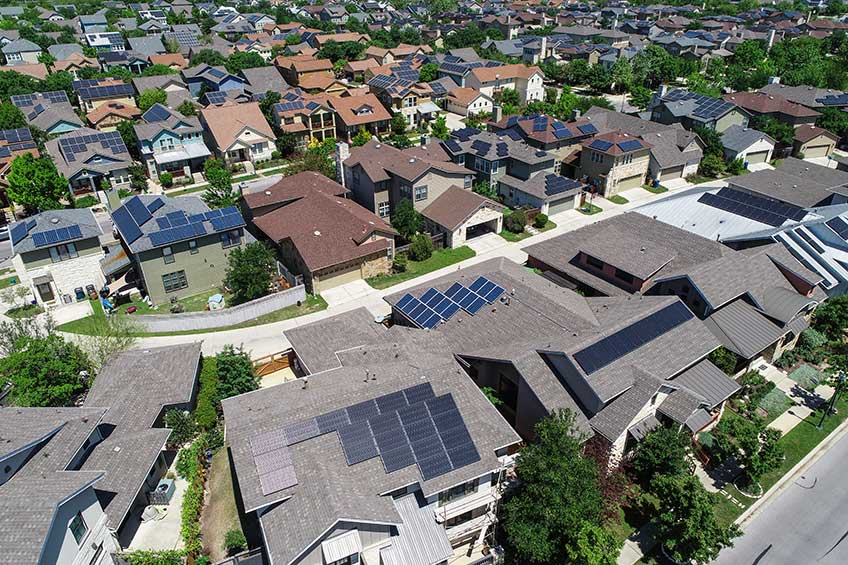 The Arizona Solar Center is often asked the question “How do I find out if solar energy is the right choice for me now?” It seems like a simple question, but the answer really depends on the situation.

There are many ways to use solar energy on both personal and commercial levels. Some of the exciting possibilities for solar electric (photovoltaic or PV) power use are:

If the previously mentioned uses of lighting, communication, refrigeration, water pumping, etc. are combined into a single power system, renewable energy can be used to provide power for the basic needs of entire villages, encampments, and recreational areas which may be too far from power lines to ever have grid-supplied electricity.

Over the last decade it has become routine to have home solar electric systems that are connected directly to the local utility and operate without batteries. These are called grid-tied systems, and are the focus of most residential and commercial activity. In Arizona there are utility rebates (actually incentives to install, with the resulting environmental credits being assigned to the utilities) that offset a substantial portion of the costs of installing grid-tied PV systems. In some cases this can include domestic hot water systems. Refer to other parts of the Arizona Solar Center website for more information. There is also information here about tax credits and rebates.
To begin answering the question “How do I find out if solar energy is the right choice for me now?” please review the following Frequently Asked Questions. After understanding this basic information, please see our "Path to PV" below, which follows a typical but fictitious family on their journey of learning and finally making the decision to go solar.

Frequently Asked Questions- Is solar energy the right choice for me now?

The following is specific to photovoltaic power systems

A Path to PV

One day, Sunny and Sam Brightly were driving about town when they saw a home with a large number of solar modules on the roof. It looked pretty expensive.

Later while watching tv, they saw an advertisement on a new financing plan being offered to help make the installation of solar systems more affordable. They remarked about it, but took no action at the time.

The following week their oldest child came home from school and told them how they had just learned about using sunshine to make electricity. He asked his parents, "Why don't we do something to use solar energy?" The parents said "Let's see what we can find out on the Internet." They searched "Solar Energy" and "Arizona." A top hit was the Arizona Solar Center, so they looked at it. There was a lot of information and various descriptions of programs, including a list of other organizations.

Since they had seen news about utility incentives and there were links from their utility’s webpage to solar programs, they followed a link to their utility's solar section and reviewed the basic steps.

Using their utility, the Arizona Solar Center, and other sources as references they decided to ask three different companies to make presentations and estimate the cost and performance of potential PV systems that would best fit their home.

The interactions with the prospective suppliers varied. Some asked if they already knew the size of the system they would be interested in, but the family wasn’t sure. Others asked about their local utility company, the kind of roof they had, or their typical summer electric bill.  One supplier requested that they ask their utility for a summary of their usage history (easy to get). The Brightly family had questions of their own such as “What will your system cost us after tax credits and how much will we save on our electric bill?”

All three suppliers visited the home, took measurements of the roof area, inspected the electrical service and decided on the best place for the inverters. Each approach was different; one supplier presented three basic standard kits with about a two to one range in costs and no specific options. Good looking literature, but only annual performance data.

Another supplier arrived with a copy of an aerial photo of the house (obtained from the www.maricopa.gov/assessor web site) with an initial layout of an array of specific PV modules that seemed to fit well. There was a detailed quote for the illustrated layout and an offer that the size could be easily varied and a new quote printed out.

The third supplier came out, made measurements, asked some questions, answered many questions and later sent an estimate. A typical form used by suppliers to gather site data is included here as a reference. <link to be made>

All three suppliers were either Arizona licensed contractors or used a related contracting company for the installation. All asked about any Home Owner Association (HOA) restrictions, which the Brightly’s did have. All explained the legal situation in Arizona and took photos for future reference.

It was determined that the home had a south-facing main roof area with asphalt shingles at a four to twelve tilt (about 24 degrees), and with no shadows on the roof from other homes or trees.  The south side was the back of the house and the electrical service was on the east side of the house with 200-amp service and available space in the circuit breaker panel for a 2-pole breaker. Because of their HOA, the Brightly family also had the requirement of applying for permission from the Architectural Review Committee to install the system.

They were now faced with evaluating three differing bids, some with size options. All suppliers offered different brands of PV modules, different inverters, and different mounting kits. This was all very confusing. The family asked for some customer references and even looked at one system that was nearby. They checked the contractor names on the Arizona Registrar of Contractors website (www.azroc.gov/) and all were in good standing with residential electric (R11 or CR11) electric licenses.

The Brightly’s used several methods to compare and rank the possible suppliers:

Calculated the cost per installed watt for each quotation. This resulted in figures running from $2.30to $4.00 per peak watt (the maximum rated output) prior to any rebates.  Small systems had the higher cost per watt.

For comparison the Brightly's calculated the estimated annual kilowatt-hours per PV array installed. This resulted in figures running from 1,680-1,825 kWh.  The supplier with the higher figure could not give a good reference for the value, while the others stated that their calculated estimate closely matched the measured performance over a few years by a local utility in Phoenix.

They eliminated the supplier who could not justify the high estimated annual output calculation. The decision between the other two suppliers was more subjective and they decided on the supplier who best answered their questions.

With the signing of a contract and an initial payment, the supplier prepared the basic utility reservation for an incentive payment. Both parties signed the reservation and it was sent in to the utility. The utility generally acts on the reservation and sends the homeowner an Interconnection Application with their requirements identified.

The Brightly family contacted their HOA and picked up an HOA application. After asking the supplier for a few details, the application was filled out and submitted along with the requested fee. The application was approved and the Brightly’s were on their way to a clean and renewable source of energy.

Although your experience may not be exactly like the Brightly’s, there are certain steps that your contractor can do to facilitate the process. In addition to ordering the materials and scheduling the installation, the supplier usually has two related tasks:

After both the permit and the Interconnection Application are approved, the system can be installed.

Installation generally requires 2-3 days depending on crew and system size.

The utility is then notified of the passed building permit inspection (they may want a faxed copy of the inspection tag) and will schedule the utility inspection. If all is in order (the utility is particularly interested in the grounding, cable sizes, required labels of parts, usually detailed in their Interconnect Agreement), the utility will turn on the inverter, observe proper operation, make a disconnection test, and then leave the system operating. Again, if there are any problems the installer is responsible for correcting them.

After the inspection, the utility generally requires an Installation Certification Form (name varies) along with copies of invoices and a statement of payments showing that the homeowners have paid for their portion of the system. Some utilities offer assignment of incentives to the installer. The utility generally mails the incentive payment check within a few weeks.

This might seem like the end of the path, but it is not. With the system now operating, the supplier should schedule a training visit with the homeowner and train the homeowner on system operation.

The homeowner is due a copy of all user manuals (a system manual is often prepared that contains copies of all documentation). Arizona law (see http://www.azsolarcenter.com/economics/guidelines1.html) requires that the homeowner be furnished a written statement of certification and a statement of performance. This must include what general performance the purchaser can expect from the system under typical conditions in addition to a statement of warranty.

There is really no end of the path, but just like the Brightly’s, yours can begin here. Your system should operate for over 25 years with minimal attention and continue to provide benefits that the whole family can share.

A quote from a Scientific American article sums it up:

“But the upside is that homeowners with photovoltaic panels on their rooftops can rest assured that as long as the sun shines, they will have power to spare without generating emissions of carbon dioxide and other noxious pollutants.”