Sustainability is also often referred to via the three intersecting spheres of people, planet, profit, and works toward this "triple bottom line" rather than focusing solely on financial returns. Sustainability seeks to protect our natural environment, human and ecological health, all while driving innovation and not compromising our modern way of life.

It's a term that everyone has heard but not everyone understands. At its simplest, sustainability is described as “development that meets the needs of the present without compromising the ability of future generations to meet their own needs." (www.environmentalscience.org/sustainability)

The science of climate change exploded in the late 20th century when we first started understanding problems stemming from the greenhouse effect and destruction of the ozone layer in the '80s. That awareness, combined with the realization that some of our resources were finite, especially fossil fuels, stimulated efforts to transition to renewable energy.

The need to act spurred global conversations but little policy change at the federal level. Cities primarily bear the brunt of climate change impacts, absorbing the consequences of increasingly severe weather events, sea level rise and storm surges. Frustration with federal inaction led cities to take matters in their own hands; a handful of states and numerous U.S. communities began to embrace sustainable concepts, trading in the status quo for a more inclusionary, environmentally friendly vision for the future. 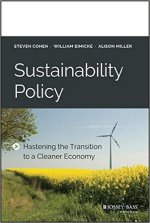 According to the book Sustainability Policy: Hastening the Transition to a Cleaner Economy by Steven Cohen, et al., roughly half the world lives in urban areas, predicted to reach 60 percent by 2030.  This work logically explains why cities are uniquely positioned to make a difference since they manage and provide public services with a direct impact on sustainability: transportation and transit; building form and codes; community development; open spaces and natural resource management; trash and recycling; and water, stormwater and wastewater. Cities are living laboratories for innovation, many with technological clusters uniquely poised to explore solutions, take risks, fine-tune results and try again with the next iteration.

What gets measured is valued, and today, nearly 100 cities, towns and counties are actively working with the STAR Community Rating System (Sustainability Tools for Assessing and Rating Communities) as their sustainability framework and certification program. As of April 2016, 51 communities are STAR rated and thousands have downloaded the rating system since its release in 2012. (www.starcommunities.org)

"It was a natural progression," said Aaron Lande, Manager of Operations & Member Relations for STAR Communities. "The U.S. Green Building Council's LEED certification for buildings started the discussion, which expanded to LEED ND to guide neighborhood design, which led to STAR as a community-wide measure of well-being for all residents."

STAR explains the certification process as helping "local leaders gain a deeper understanding of their community’s strengths and needs and provides a springboard for civic engagement, cross-agency coordination, integrated budgeting and performance management, partnerships with philanthropy, and economic development." The results identify gaps that can help prioritize investment, and can expedite or change the way communities address sustainability.

"People hear 'sustainability' and immediately jump to 'tree-hugging' and 'granola' and 'I'm not interested in that,'" Lande said. "STAR has worked to expand the definition of sustainability. It might be helping elected officials understand that just because they ran on 'the greenest mayor ever' platform, and won, that sustainability is not just about the environment. It's about creating a community where people want to live, and have jobs, in addition to breathing clean air and drinking safe water.

"Sustainability is not about a green building shell in the middle of nowhere. It needs to look at context and the people inside the building."

Another group working on sustainability in the broader context is the Urban Sustainability Directors Network (USDN). Its members, working together to share ideas, research and collectively move the needle forward, represent 70 million people in cities and counties in the United States and Canada.

"When USDN was founded about seven years ago, there were a small number of people holding the title of Sustainability Director throughout the United States and Canada," explained Natalie Narotzky, USDN Communications and Member Services Coordinator. "They decided to form a collaborative network so that they could share best practices and not feel like they had to reinvent the wheel each time they wanted to start a new project. Since the network was formed, it has grown to include over 145 communities with nearly 600 sustainability office staff participating on various topics."

USDN maps the network's connectivity by asking members how well they know their peers. In 2009, members knew eight others on average; now that number is nearly 40. "The majority of members cite that USDN has helped them save time, find a solution to a key challenge, and gain support for a policy/program/process," Narotzky said.

One area where USDN has seen a tremendous growth in impact is energy benchmarking and disclosure policies. Between 2012 and 2015 USDN members convened four times through USDN Innovation Fund and Peer Learning Exchange Funding, creating the Office Building Benchmarking Guide. During that time the number of communities with adopted policies has tripled to 15.

San Francisco, an active USDN member, will soon become one of the first big cities in the U.S. to mandate solar power for new buildings. As reported in Fortune magazine, it affects all new buildings up to 10 stories tall, both residential and commercial, requiring the use of either solar panels for electricity or a solar system to heat water. (fortune.com/2016/04/20/san-francisco-solar-building-law)

While clean energy is on the agenda for the federal government and some state governments, "aggressive cities have moved much faster than state and federal governments and have implemented their own methods for meeting clean energy goals." Fortune credits the California cities of Lancaster and Sebastopol with similar solar laws to San Francisco's new legislation.

STAR counts utility-scale solar systems in its ratings, and Lande has seen solar spread as a small-scale energy solution. "It's heartening," he said. "We've heard from communities that 'we should get credit for this' but then the next phrase is 'how do we effectively measure and report from individual buildings'?"

It's obvious that solar is spreading as solar affordability rises, but so is utility opposition to it, with some waging all-out political wars at the ballot box.

One major threat to sustainability over the years has been a massive resistance to Agenda 21. Agenda 21 was described as simply a “voluntary action plan that offers suggestions for sustainable ways local, state and national governments can combat poverty and pollution and conserve natural resources in the 21st century.”  Yet, conspiracy theorists have made a “mythical” link between Agenda 21 and a supposed plot to disrupt U.S. sovereignty at every level. In actuality, it was a non-legally binding program that was approved by 178 governments, including the U.S. led by then-President George H.W. Bush, at the 1992 U.N. Conference on Environment and Development in Rio de Janeiro. (www.thedailybeast.com/articles/2014/04/13/agenda-21-the-un-conspiracy-that-just-won-t-die.html)

Agenda 21 opposition seems to be waning, but as it does, sustainability is now starting to suffer from similarly aggressive organized resistance to solar. Lande reported challenges with communities that are working through the STAR documentation and experience a change in City Council leadership mid-way through the process. Occasionally the new guard doesn't feel it's worth the time or effort to keep going with STAR evaluation and reporting, and the work stops.

The most damaging pushback is often at the state level, however. As cities work harder to mandate sustainable solutions, the biggest challenge to lasting change is political, with several state legislatures preempting cities' abilities to create local regulations that differ from state rules. (www.nytimes.com/2015/02/24/us/govern-yourselves-state-lawmakers-tell-cities-but-not-too-much.html?_r=1)

It is a disturbing trend that leads to an honest question inspired by none other than Thomas Jefferson. If, as he said, "The government closest to the people serves the people best," then why are elected officials at the state level actively working to supersede local governments, especially those that are thinking of our future?

Lande stated what should seem obvious about sustainability's impacts and importance: "If the solution creates a more efficient use of resources, financial or otherwise, then ALL affiliations should be supportive."

Question: If Thomas Jefferson was right in claiming that local government is best at serving the people, why might elected state officials be actively trying to thwart the intentions of local governments?

Jen Baker works as a Sustainability Analyst for the City of Raleigh, North Carolina. Jen is a graduate of Arizona State University and the University of Iowa.

What Goes Around – Comes Around

The Calm Before the Storm